Winning projects have been announced today in the Dartford & Gravesham NHS Trust and University College London Hospitals Green Ward Competitions. Teams were competing for a £500 prize to spend on further green innovation.

In London, the Neuropsychology Department scooped the UCLH prize for its project, “Step One for a Paperless Office”.

The department's green team (made up of clinical and administrative staff) successfully reduced the number of paper referrals they receive by 68 per cent since January and aim to eventually save more than 16,000 pieces of paper a year, while freeing up staff time.

Their first step was to identify where they were using paper excessively, with a focus on their referral system. They asked all teams and departments who send referrals by paper to send them by email instead, and changed their internal referral handling to electronic from paper-based. They have also reduced the number of letters sent to patients, replacing them with phone calls to arrange an appointment.

Haider Ali, administrative team member, initially suggested the idea to the rest of the team. He said: “It definitely has made it a lot easier. We are not only saving paper from our departments – but other hospitals too.  Emailing is far easier for the admin team and doctors too because it is easier for them to grade the referrals and they no longer have to come and physically collect the referrals. The process is better all round.”

The Neuropsychology team was up against another paper-saving project from the Workforce Department, in which staff records are being moved from paper to electronic filing - saving around 300 sheets per staff member.

Judges, UCLH medical director Dr. Geoff Bellingan and director of capital investment Keiran McDaid, and CSH medical director Dr. Frances Mortimer, said they were ‘hugely impressed’ by the commitment of both teams. The winning project was chosen because of the success of the Neuropsychology team in involving other departments and GPs in changing to electronic referrals.

In Darrent Valley, the Dartford and Gravesham prize was won by the cardiac team. 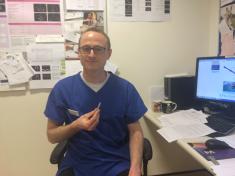